For further confirmation on the identity of this bird, I posted an image on the Facebook group, Sask Birders. Soon enough, another member said she had seen a Brown Thrasher in the mouth of a fox going one way, and minutes later, a Brown Thrasher without a tail running the other way. She added that the tail feathers grew back over time. I wonder if this is a defense mechanism.

Brown Thrashers are rusty or reddish-brown on the topside with a beautiful long tail which is sometimes pointed high. It's very noticeable, especially when they fly up and away from you.


However, the wing bars on my image of the Brown Thrasher without a tail seem almost nonexistant, and it's hard to tell if the wings are the correct length for an adult thrasher, such as the one shown in the above photo which I took a year ago, in June 2019.

A check through my photo files brought up two interesting photos of Brown Thrashers. The first is a photo of a juvenile taken in June 2012 where I spotted one camouflaged under the evergreens in our shelterbelt while an adult kept watch nearby.


The wing bars on the Brown Thrasher in this next photo made me think of a juvenile, but it has the long tail of an adult. Because this photo was taken in September of last year, I now believe it's a Brown Thrasher in molt. Mid-July to September is prime season for birds to shed their old feathers and grow new strong ones for the long trip to their wintering grounds, so if you see a bird who appears to have lost its dignity along with its beauty, and it's too old to be a juvenile, it's probably molting.


Here's the video I took of the Brown Thrasher without a tail, which is also available on my YouTube channel. https://youtu.be/YKRICrGNpXo

Our photos can also be found on our Bird and Wildlife Pinterest boards, as well as on Instagram.

The prairie wind has been ferocious this year straining power lines to their limit. Tree branches are a particular menace on windy days. Recently, on a harsh, windy, HOT day, a tree branch tangled with a power line in the corner of our farmyard. We saw the fallen line on the ground and tried to contact the power company who had numerous calls already on the go. Not long after, we saw smoke coming from the area and called 911.


The Montmartre Fire Department showed up in record time and got to work putting out the fire. Since the line was still live, the guys stayed on guard for several hours in case the fire flared back up, waiting for the power company to come out and shut the power off. 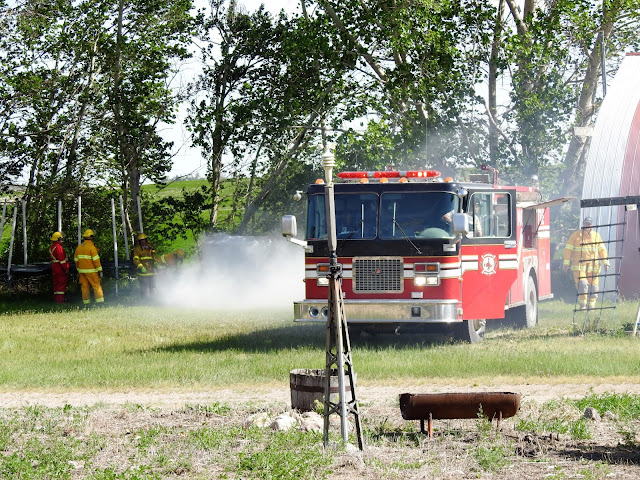 The Draper family would like to thank the Montmartre Fire Department for their quick response. The damage to our farm and more could have been horrid if the fire had gotten out of hand.