This past weekend was difficult as I realized once again that I wasn't a finalist in the Genesis contest. The wound deepened when I received my judges' scoresheets and discovered 2 out of the 3 judges just didn't 'get' the story. I won't complain about the comments, but I will say I shook my head at a couple of them.

On Sat afternoon I received word that someone else had won the Duel on the Delta contest. Ugh. Very disheartening. But I'm up here at St Peter's Abbey for the Saskatchewan Romance Writer's annual retreat and my fellow writers are wonderful support. Between them and the Inkies, they pulled me out of my doldrums and rewarded me with chocolate - both in physical and virtual realities.

After supper I walked the beautiful grounds taking photos and trying to shed my disappointment. 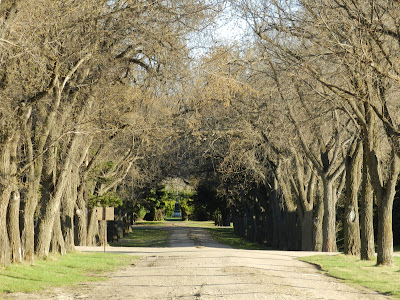 Imagine my surprise, then on Sunday afternoon when I was working on my Tues history post for the Inkwell when my iPhone rang. The theme song of The Good, The Bad, and the Ugly filled my small room as I scrambled to answer the phone that never rings.

A really nice woman in Virginia called to say I'd finaled in the Fool For Love contest. Really? I think I blubbered as I thanked her. It was almost too much after the weekend's disappointments. Almost.

I hung up the phone and let out a whoop. It echoed down the hall as a bunch of eavesdroppers broke into a cheer. My fellow writers had once again appeared at just the right time to support me. Heh.

Yes, I'm happy dancing again. But with all the ups and downs, I might switch to a jig or something. 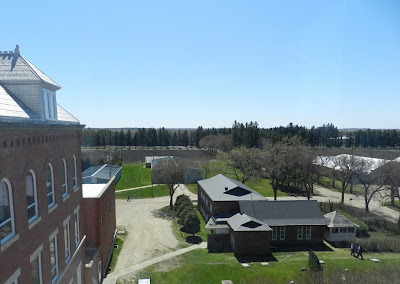 This photo is take from the top floor of St Peter's College. The building in the foreground is Scholastica which is our home while at the retreat. Except for walks and our meals, our time is spent in our individual rooms working on our works-in progress, or talking writing in the lounge.

I leave the Abbey tomorrow morning and continue a research trip I started en route here. If you want to see some photos of 19th century buildings, check out my HBC Research Trip post over at Inkwell Inspirations on Tues.