Spring has been a slow melt which is good because many parts of Saskatchewan are flooding even with the cold weather. I've been out taking pictures every day and am working on a neat 'flood' post for you but I wanted to show you photos of the porcupine since it looks like we've seen the last of him for this year.


Several times we found him in the trees, like this photo from April 7th: 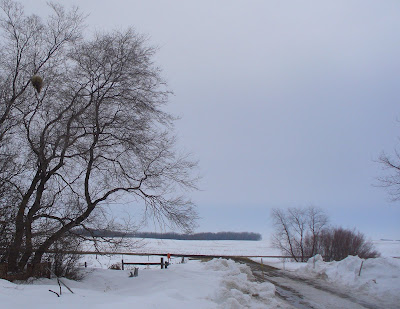 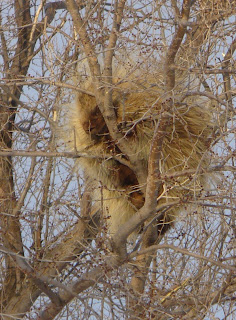 But unlike the first day when he scooted down the tree and left, in the succeeding days he only froze when I stopped to take his picture. A good photo op, but no munching action.
On Apr 9th he moved to what would be his highest point before leaving us: 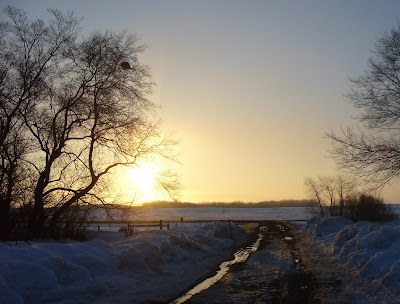 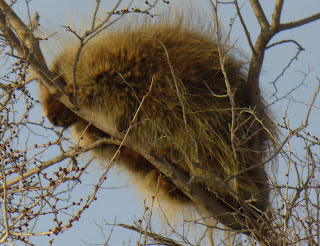 One time I looked out my kitchen window at the right moment to see him slip and hang by his front paws for a second before pulling himself back up. As you can see, he's such a cuddly looking animal... 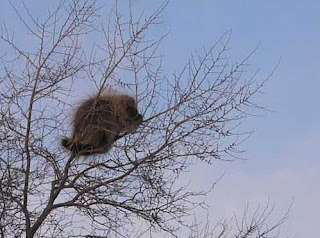 Apparently the little critter was really out on this limb and at one point he crawled out so far Nelson saw the branch curve down until the porcupine scuttled back.
However, he left plenty of evidence of his visits behind in the manner of branches stripped of bark. 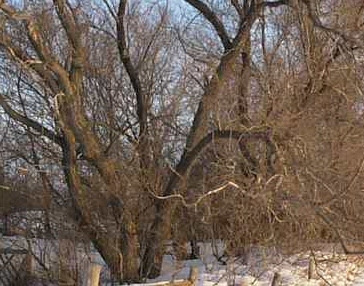 This isn't good because it leaves the tree susceptible to insects which bring disease. And that's if the tree manages to stay alive without its protective barrier against the harsh and drying prairie wind. 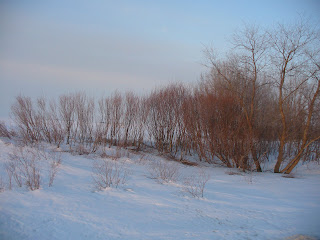 Here's the batch of wolf willows at the end of the driveway where we first saw the porcupine. 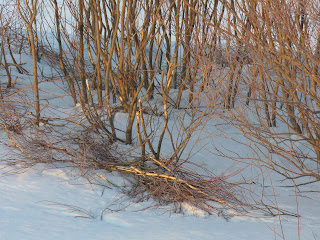 So, he may be a cute critter, but he's not cuddly and he certainly isn't nice!

If you want to relax for a minute, here's a video I took of some snow geese flying over my head on Apr 7th before the clouds hid the sun and the porcupine was in another tree close to the garage. Turn the volume up if you want to hear the geese. A special day - no wind!