I hope everyone had a great holiday weekend. Here in Montmartre, SK the sky was cloudy and drizzly but it didn't dampen the spirits of those coming to attend the 100 year celebrations. 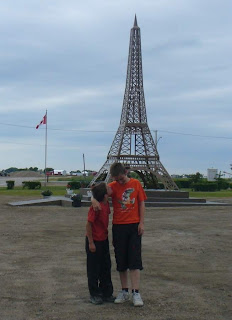 I stayed home. Since we've only been living here 10 yrs, we don't have ourselves invested into the history of the Rural Municipality (RM) as much as the long-standing citizens. So the boys went, but I stayed to get some plotting done.

Today after church, however, I stopped in to take a few pics of the new replica of the Eiffel Tower. There's rumours going around that it will be taken down because of the threat of kids climbing on it. I wonder if the RM's insurance rates will skyrocket because of the structure. We'll have to see.

Anyway, there's been a change at home as I'll be dropping off both boys at camp on Monday which leaves me kidless for the week. Yay!

I'm also participating with eHarlequin's JunoWriMo Challenge. My goal is to write 3,000 words a day starting Tues once the kids are at camp. I'll let you know how I do.

So, how do you like writing in the summer? No problem? Or would you rather be enjoying the summer? 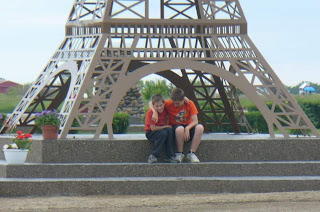