So, it’s 2 days after Christmas. The anti-climax day for me. The rush of getting ready for Christmas is over. The presents are open, the turkey has been served and the clean-up done. Yesterday - Boxing Day here in Canada - meant heading to the city at 8 am to battle...uh...share the shopping frenzy with more people than I’ve ever seen shopping at one time. The city roads were icy and I almost got rear-ended 3 times. Two of those times by the same truck driven by a man who didn’t seem to understand what a stop sign meant. I wouldn’t have worried too much but when he had to drive into the oncoming lane beside me in order not to plow into us, I got a bit worried about the kids safety. Anyway, we arrived home at 7 pm safe, tired and happy with our purchases.

Hubby was late getting home from work so by the time he drove up, we had the table cleared of everything but 5 metal spoons and part of a deck of cards. Yes, we were going to play SPOONS, that fun, ballistic game where it’s every man...er...child...er...person for themselves. A quick glance around the table ensured everyone’s nails were cut. It’s bad enough to smash knuckles during the course of the game while you’re grabbing a spoon, but no one likes being scraped or stabled by a fingernail.

Everybody from Dad and I (the Mom) all the way down to the 10 yo – our youngest was in on the action. It’s a simple fast paced card game and all you have to do is match 4 cards in your hand and then grab a spoon. When one person grabs a spoon, the rest are up for grabs. Of course, there’s only 5 spoons to the 6 of us playing. Think of it as Musical Chairs without leaving your seat. If you don’t get a spoon, you win a letter. The first one to spell SPOONS is out. I was the 3rd one out. And no, I didn’t get any scrapes but teen J literally jumped on me to grab my spoon at one point but I wasn’t letting that baby go although I h

ad dents in my fingers from gripping it so tightly by the time she gave up.

I believe there were a couple scuffles under the table from flying spoons but I wasn't in on those. After a 2 hr game, Dad was declared the winner. He said good-night and went to bed with a smile on his face. He was the only one who had to get up early for work today.

I awoke this morning with shoulder and leg muscles aching and feeling like I’d been dragged behind a horse for 17 straight hours. I’m sure it was from all the tension yesterday of driving the icy streets and jockeying in position with all the other harried shoppers but then, it could’ve been the Spoons game.

I decided today was a Play Day and I’m still in my jammies. After checking my email this morning, I read a bit. Then, I settled down for a few tracks of Wii Mario Kart but my hands cramped up after 2 races so I went back to reading. When the rest of the kids got tired of racing, teen J and I decided to try our hand at the Wii winter sports game we bought for only 8 bucks yesterday at WalMart. I like this game a lot better because I use my whole hand and not just my thumbs. This game is also great exercise because we stand there and simulate the movements.

No, we didn’t win...in fact we sucked at skiing but it sure was fun. Now, my arms are tired. Sigh.

The boys are racing again and hubby just went back to work after eating his lunch but his last words to me was to rest up because he’ll be back in an hour or so and then the competition is on! Yippee!!!

Have you ever tried the Wii or any other game system? Or do you like the old card or board game better?

I'm in the middle of last minute wrapping after the last minute shopping yesterday, but I'd like to send a Merry Christmas out to all my family and friends.

Sometimes this can be a hard time for those of you who've lost loved ones or are all alone. I'd like to pray for you and maybe even with you.

If you need someone to talk to or pray for you, please send me an email or leave a comment and I'll get back to you.
I'll be monitoring this site and my email today, tonight until I hit the sack, and then as soon as I get up tomorrow - and all day Christmas Day.

Merry Christmas and may God's love shower you with blessings.
Posted by Anita Mae Draper at 3:52:00 PM 3 comments:

As promised yesterday, here is a pic of some of the sugar cookies Dad and the kids decorated on Monday afternoon.

Our church Christmas program was entitled 'It's a Boy'.
I played the part of a Biblical teacher with a couple of students wondering if Mary allowed others to hold her precious baby.

The wisemen, also called the 3 Kings, were announced by a young girl dressed in a Japanese outfit.
The 2 young boys on the left are my real life sons.
Posted by Anita Mae Draper at 12:57:00 AM 2 comments:

Getting Ready for Christmas

I pray that everyone isn't getting too stressed out during this busy time of year.

I've already had a visit by my mother-in-law and my sister's family.

Our eldest daught is finally home from Vancouver, BC for another week and it's such a delight to be spending this time with her.

Somehow the kids have roped me into taking them shopping...again...so we'll be leaving soon.

I still haven't sent out any cards and I don't think I'm going to at this late stage.

Yesterday, we made a quadruple batch of sugar cookies. I cut out the cookies and put them on a tray. One of the kids carried it to our large oval dining table where the rest of the family sat waiting with coloured sprinkles, the little brown thingies, tiny gingerman candies, etc. The trays of decorated angels, candy canes, Santas, stars, stockings, presents, holly, reindeer and snowmen came back and I popped them in the oven. It only took 2.5 hours and then we were done but I have cookies galore. Well, at least for a couple days. LOL I try to post a pic here later.

We took about 3 dozen cookies to our church Christmas program last night. We were all part of the Christmas play. The 2 boys were the kings/wisemen. I was a biblical bystander. The teen was a pigtailed kid demanding a story from her dad, played by a church member. Hubby did the lights. And our visiting daughter worked the video and camera. It was hectic getting everyone's costumes ready, but oh the satisfaction of a performance well done. I'll try to post a pic here later.

But now...the kids are awanting to go shopping. At least it's warmer out there with -28C/-18F temps. I don't mind getting out when it's like this at all.

So, how's your holiday preps coming? Are you ready?
Posted by Anita Mae Draper at 9:52:00 AM 2 comments: 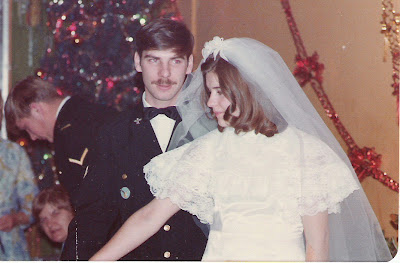 In June 1976, I met a very special man, became his fiancee in Sept and married him in Dec.

He was a young Corporal and I a Private in the CAF. With those salaries, we didn't have the money for an expensive wedding. I bought satin, lace, tulle and a pattern, and a friend of mine stitched my dress.

It might have been a whirlwind romance, but it’s lasted 32 yrs.

(For those of you who know me now, can you believe that photo?!)