Last fall I posted on the theory that the severity of winter can be predicted based on the colour pattern of the Woolly Bear Caterpillar. Here's what the 2011 Woolly Bear looked like:

The Winter of 2011 was very mild. It started early with cold weather in Oct, and didn't seem to end until April, but the temp only dipped colder than -20C/-4F six times. And of those six, I don't recall any being extremely cold - like colder than -40C/F.


The band looks almost the same ratio as last year, however, he doesn't seem as woolly. In fact he's so sparse, I can see his skin especially around his head.

If you look at this poster, the least woolly caterpillar is the bottom one which is listed as a severe winter. Or is it the same, but only looks sparse because of the artist's rendering? 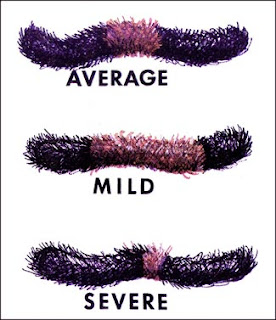 So I suppose we have 2 things to look out for - the band ratio as well as the woolly factor.

One other difference which you can't tell from the photos is that last year there were caterpillars everywhere! They were crawling up the walls outside as well as inside the garage. This year, I only saw one or two and none in the garage. Well, hubby did put a new door on the garage to keep my office warmer, but he hasn't finished the trim yet and there are still gaps where critters can get inside.

Finally, we saw a new type of woolly caterpillar this year. It's about 1 inch long (half the length of the Woolly Bear) and was sighted twice - both times this size. My research showed this as the Yellow Woolly Bear caterillar which will grow into a White Tiger Moth instead of the Brown Tiger Moth as above.


Snow already fell in Oct 2012. Nov has been a mix of temps with the snow thawing and dripping but other days are brisk and cold creating dangerous walking and driving on the ice, and the white stuff is still here. Will it be a long, mild winter like last year, or a short severe one like 2010?