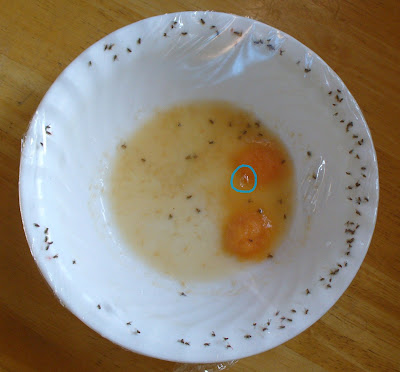 Using Random.org, I've picked a winner from those people commenting on My Daily Dolphin Walk post whether they commented on my personal blog, on Facebook, or on my eharlequin blog.

And the winner of an autographed copy of Victoria Dahl's Crazy for Love is... 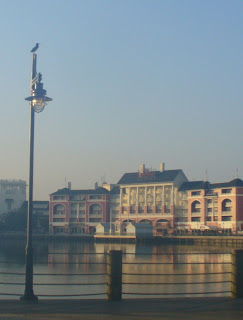 Today's photo is cropped so you don't see the full effect, but it was taken within minutes of stepping outside outside the Yacht Club at 7 am. The heavy humidty would fog my glasses, as well as my camera lens.
I don't know what type of bird is atop that post, but it was one of the bigger ones I saw in Orlando.
In the background, is the Boardwalk Resort.
Posted by Anita Mae Draper at 9:17:00 AM 2 comments:

My post Last Friday contained photos from our vacation at Disney World. For this post, I thought I'd show you my walk from the Dolphin Hotel back to the Yacht Club.

The Swan and Dolphin Resort is where the Romance Writers of America (RWA) conference was held and my main reason for being at Disney World. I showed the Dolphin in my last post, so this time I'm showing it's sister. 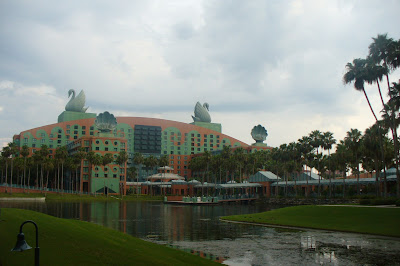 The door I usually exited from would have been on the right of this photo, around the edge of the square edge of the pond. A covered walkway lined with palms connects the Swan and Dolphin. In the middle of this pomendade, is a dock where Disney's Friendship Launch collects passengers for the short trip to Disney Hollywood Studios, Boardwalk, Epcot and the Beach and Yacht Club.  In the photo above, on the left, you see the start of the double bridge which connects the Swan to the others. 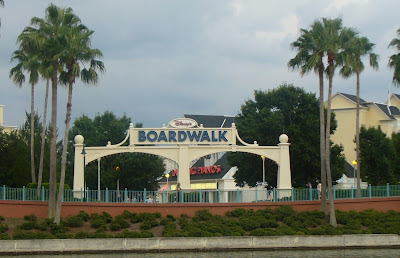 The entrance to Boardwalk is in the middle of a double bridge that spans the distance from the corner of the Yacht Club Resort to the Swan Hotel. I walked over it one morning and had a bit of a fright... I didn't realize until my head started pounding that I'd forgotten to take my blood pressure pills and although I had them, I didn't have any water or other liquid. Let's just say I spent the rest of the walk in prayer and took my pills at the first opportunity.
But, on my normal walk, if I turn left with Boardwalk across the water on my right, this is what I see... 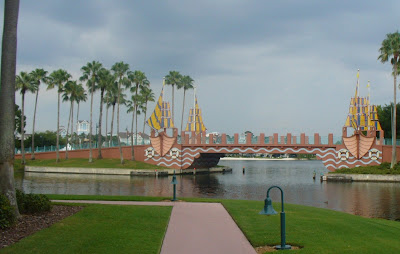 The water taxi goes under this bridge to enter the lagoon which is surrounded by the Yacht and Beach Club on the left and Boardwalk on the right. If you look under the bridge, you see the white sandy beach of Stormaway Bay which I'll feature in later posts.
From here, I follow the sidewalk to the left around the final wing of the Dolphin. The walk is pleasant, with tame ducks crossing my path and a wall of palms so high, I couldn't capture them in one shot. 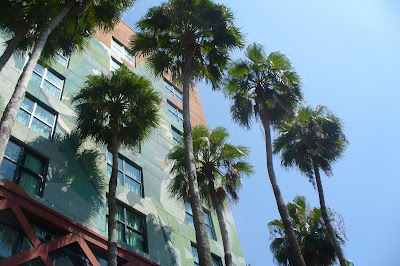 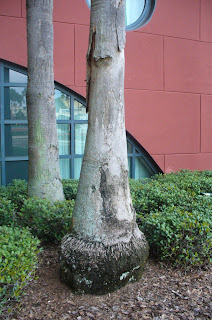 Actually, the base of these tall trees caught my eye as well. They reminded me of a tree that's had earth taken away from it's base so that it sits higher than the surrounding landscape, but in this case, I think it's actually the way it grows. 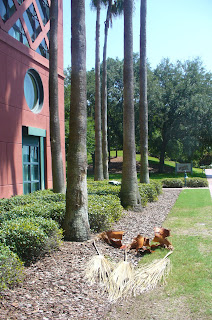 In this photo, three palm fronds are lying on the ground beneath the tree. I assume this is a natural progression of growth, like most plants, as I often saw them under trees and at the edge of ponds. I even saw a cast member fish one out of a flower bed.
The sidewalk ends at the road on the other side of the trees which is the official edge of the Dolphin Resort.

It's also the start of the bridge to Boardwalk and the Swan Hotel... 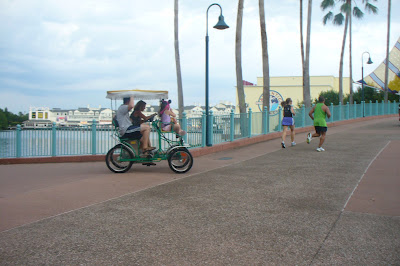 The bike cart in this photo is one of the favourite attractions of Boardwalk. This is a single-seat bike cart which seats four (2 kids in the front), but a double-seated one (also with the capacity for 2 kids in front) is common as well. Each one is fitted with a bell and rope and the families who tour the lagoon on it make good use of the clang, clang to make themselves known. Pedestrians shared in the jovialty of the passengers bringing lots of smiles even though several went through every hour, right until 10 pm. That's Boardwalk in the background of the above photo. 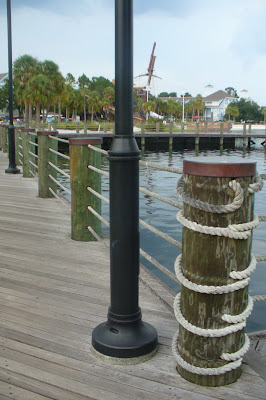 Once I cross the road, I'm back on the Yacht Club Resort property and continue my walk along the lagoon.
The dock to the right which leads to the lighthouse where you catch the water taxis to Epcot, Boardwalk, Disney Hollywood Studios, and back to the Swan and Dolphin Hotel.
And in the background, you see the shipwreck of Stormaway Bay which is the start of the waterslide.

Of course, turning left when I get to the dock is where I'm heading because after that nice walk in 36C/105F plus heat, I'm heading into the air conditioned Yacht Club.


As promised, I'm giving away another book... It's an autographed copy of Victoria Dahl's Crazy for Love, HQN 2010. Please note, this is a secular book. I have no idea of the 'heat' level, but the cover reads, 'A fun, feisty and relentlessly sexy adventure.'

I'll collect names for this draw from all those leaving a comment here, as well as my Facebook and eharlequin.com blogs for this and any post up till the deadline of midnight, Sunday August 22nd.

*** Since someone - waving at Patti :) - made the observation that they thought I was showing actual photos of a Dolphin on this post, I've looked through my photo collection and found this... 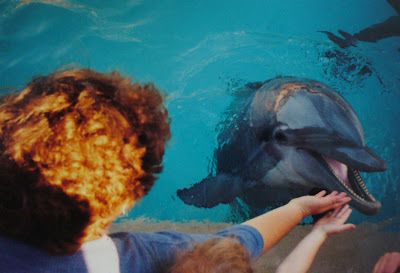 It's me and Crystal back in Oct 1997 which is the only other time I've been to Orlando. The photo is taken at the Dolphin tank at Sea World. Actually, I have a neat story from there which I'll tell someday. So many stories, so little time. 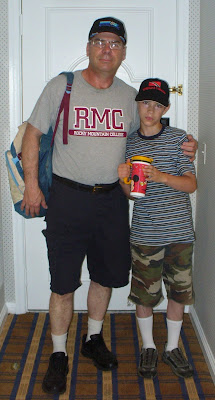 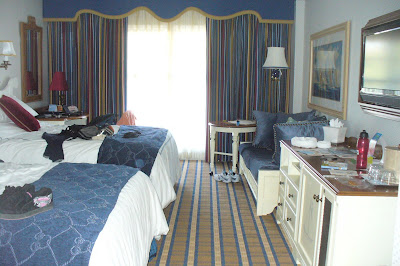 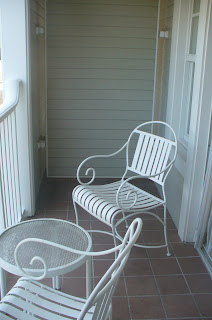 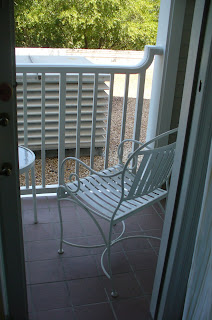 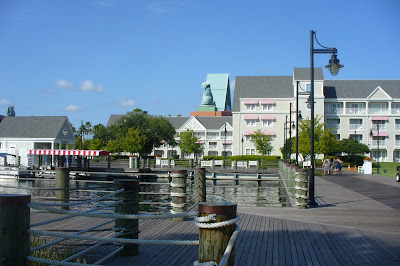 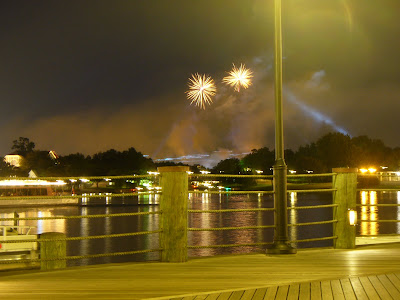 While walking through the Minneapolis International Airport last week, I saw a very intriguing sight. A woman wearing a business suit and pulling a small computer bag suddenly hopped up and waved her arm in a wide arc. We were about 20 feet behind her and I saw her face light up in a fantastic grin as she glanced at what looked like a large whiteboard beside her. She then kept walking, barely breaking her stride.

My eyes latched onto the whiteboard and I saw a bunch of leaf-like images pull together into an umbrella shape. Within seconds, I realized it was an interactive art display. Intriguing.


And there wasn't just one, but several of these large whiteboards about ten feet apart.
Here's what happened when I told JJ to wave at it: 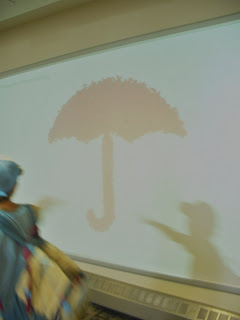 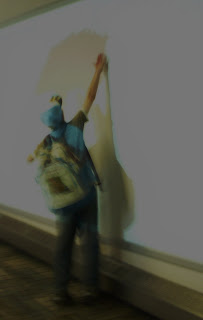 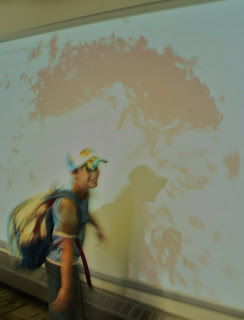 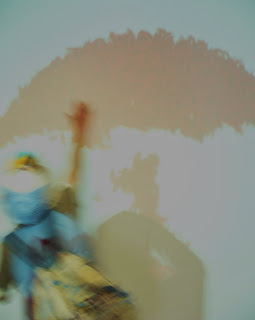 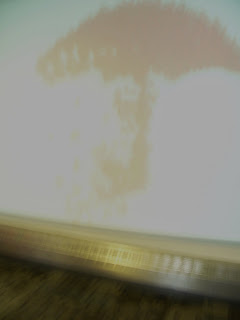 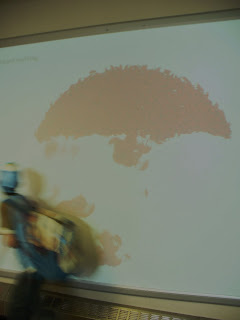 I don't know what kind of technology is used in this display, but it sure put smiles on a lot of faces.
:)
Posted by Anita Mae Draper at 12:52:00 AM 5 comments: