Trails of 1885 and Old Postcards

I'm blogging about my recent research trip at the Inkwell today under the title, Research Trip: Trails of 1885 Part 1. Here's a hint about my trip:

And if you're a member of the Draper and/or Nelson families, you may be interested in my Author Memories post 100 Year Old Postcards where I show one postcard addressed to Noah Draper and 2 to Ethel Isabell Nelson, all in chronological order so you see what they're doing before they marry. I also discuss how I'm using this information for genealological purposes.

My Transit of Venus Experience

The measurements taken during the Transit of Venus will be announced soon and then the topic will fade away for over a hundred years, so I wanted to give my experience while it's still fresh in our minds.

I expected the transit to occur like in the image at the bottom of my previous post. It didn't happen like that at all. Here's what I saw...

I went outside at 4:04 pm which was the ingress time for the Transit of Venus. I began to take photos like I'd done with the eclipse on May 20th (will post those photos soon). I found this was possible - but probably not recommended - because my camera has a flip up screen so I'm not looking up at the sun. Instead, I'm looking down at the image on the monitor which is connected to the camera by wires or some other signal.


The sun was very bright and I didn't know what I'd see, but I hoped that after I uploaded the photos into my photo editor and adjusted the settings, I would see a small black dot. However, I couldn't see anything except a bright orb. When I had done this for the eclipse photos, I'd taken them at 7 pm onward when the sun had lost much of its intensity. The Transit of Venus happened at 4pm.
Nelson saved the day around 5 pm however, when he went down to the shop and came back with 2 welding helmets. I knew he had one, but didn’t think it was strong enough, so I told him that he shouldn’t use them unless he couldn’t see the landscape through the glass. He gave one to me and I looked toward our grassy tree-encircled play area and couldn't see anything. Excited, I looked up at the sun. It appeared as the sun does on days with light clouds crossing past – where you see the pale circle through the clouds.
Nelson said how neat Venus looked and that he was going to get the boys. I couldn’t see it. He switched welding helmets with me, said it was on the top right side, then rushed into the house. I still couldn’t see it although it was kind of hazy to me.
Then suddenly, there it was! A little black dot about a fifth of the way down. Wow! I found out later while watching the NASA site of the live Transit that as people age, the whites of their eyes get a slight yellowish tinge called CalciumK - at least that's what it sounded like he said. I haven't had time to research the actual word or spelling.
Over the next few minutes, small clouds moved in and I tried to take photos through the glass of the welding helmet, but couldn't. Soon, more clouds came and covered the sun and for awhile it was only a bit covered so I took more pics, but they didn’t show Venus either. And then the clouds covered everything.
From then on I was relegated to watching the live NASA coverage on their website, so – thank you, NASA! Not only did I see the transit, but I learned so much about astronomy, coming events, solar viewing, etc. 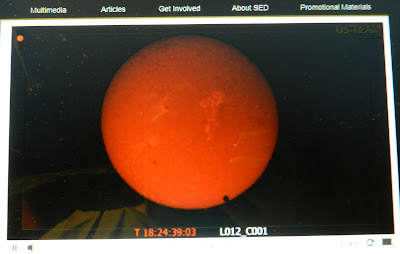 The big surprise was when Venus transited straight down from top to bottom. I thought it would curve from top to right, like that image on my website, but it didn't. In the above image taken from the live NASA website, the black dot is Venus just about at the egress point.

My one disappointment was that since I couldn’t see the actual ingress and egress, I wasn’t able to take part in the actual mapping of the distance from earth to sun on the phone app. No bragging rights on that one.
Overall, it was a memorable experience.

There are many videos out there of the actual transit - short versions because the real time was over 6 hrs - but none of those versions show Venus coming straight down.

So, what was your experience? Did you see it? How? Do you understand the significance of it? Or is it just 'meh'.

A very rare celestial occurance will happen today, June 5th, when Venus passes directly between the sun and earth. Much like an eclipse, you can't look right at the sun and see it, but if you take the proper precations such as the easy ones shown in the links, you'll see Venus as a small dot making its way across the sun - a journey of approx 6 hrs for North American viewers. The event will start at 6:04 pm EDT which is 4:04 pm MDT as well as here in Saskatchewan where we are on the same time as MDT.

Check out these Transit of Venus links:

-This link is to the Transit of Venus website which will tell you everything you need to know about this rare event and explain why you should watch it.

- This link is a fun video that explains it very briefly and with images you'll remember more than if you only read the text. http://ca.news.yahoo.com/video/transit-venus-last-chance-see-205025645.html

- If you're worried about your eyes or can't see the actual event due to clouds, etc, don't despair. Nasa is showing a live web broadcast of the event starting at 5:45pm EDT at http://venustransit.nasa.gov/transitofvenus/

And for all those amateur astronomers, there is now  free Transit of Venus phone app, which will allow you to send your observations of the 2012 Transit of Venus to a global experiment to measure the size of the solar system. This is not as far-fetched as it sounds because the links above will show how this event enabled astronomers to measure the solar system in the first place.

The phone app is spearheaded by the non-profit Astronomers Without Borders, and they invite you to join them as a supporter and a participant. More information about the phone app can be found in the left hand column of the Transit of Venus website.


If you watch the Transit of Venus, either outside or live on the web, or if you download the phone app, come back here after and let me know the details and I'll tell you what I experienced.