I haven't been posting because I'm in my cave working on deadlines for 2 contests. I had them ready a month ago but my wonderful critique partners picked them apart so a major overhaul was in order.

In the meantime, I thought I'd show you what I've been waking to every morning. The sun rises around 7 am these days and shines in my eyes while I'm drinking my morning coffee.

But what a glorious sight! And no, this pic is not photoshopped. It's the color God painted it. 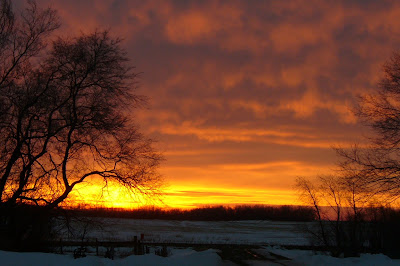 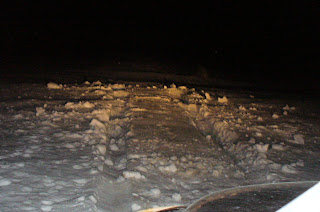 We left at midnight. This time we drove the long way around to drop off the lass. Instead of taking the young lad all the way back home, he was coming with us for a sleepover.
By the time I arrived home at 0100, I'd put 190 km/118 miles on the van.
Since the lass said her dad chuckled all the way to pull us out, I can imagine what the men will say to me at church on Sunday. But first I'll have to face Nelson in the morning. That's it, I'm going to bed.
Posted by Anita Mae Draper at 3:16:00 AM 6 comments:

It's Monday and apparently Daylight Savings Time kicked in over the weekend. But those of us who live in Saskatchewan, Canada, don't change. This means instead of being in Central Standard Time (CST), I'm now on Mountain Standard Time (MST). 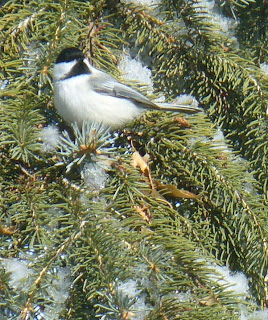 It also means there'll be a 2 hr time difference between me and my friend Gwen in Michigan and my other friend Deb in New York instead of only one. :(

I have to remember to log on an hour earlier to the Steeple Hill and Wild Rose Press chats or they'll be half over before I have a chance to say hello.
And it means I'll have to re-aquaint myself with the TV scheduling for those shows coming from the east or I'll miss those, too.
Such is the life of a person living in the middle of nowhere who is thankful her government doesn't bow to public pressure. I may have to readjust to some timings, but at least I'm not trying to reset my inner clock and fool my mind, body and senses into thinking there's an extra hour of daylight in the evening when there's not.

I took the photo last week from my bedroom window.

So what do you think of Daylight Savings Time? Like it? Lump it?
Posted by Anita Mae Draper at 12:28:00 AM 7 comments:

Yes, you read that right! I can't wait for Christmas because a fellow writer - someone I've actually corresponded with - has a Christmas movie coming out this Dec based on a book she's written. Woohoo!

I'm hosting Robin Jansen Shope, author of the book, The Christmas Edition over at the Inkwell today. Robin talks about her writing journey, her books and her movie, Journey to Paradise.

I've even included the Journey to Paradise trailer by Salty Earth Pictures and all the links you'll ever need to find out everything about this project.

Questions we're discussing today at the Inkwell are: Do you like reading books and watching movies which revolve around a holiday? Do you like to read the book, see the movie or do both?

Hope to see you there.

Not sure if any of you realized, but due to a problem with Telus in BC, I've been denied access to all Blogger sites and Google Earth since last Thurs. At least 250 others have been affected as well. And yes, because we're using a satellite internet provider, our signal goes through BC.
So now that I'm back - I hope to stay - I'm going to show you some pics of what you missed. 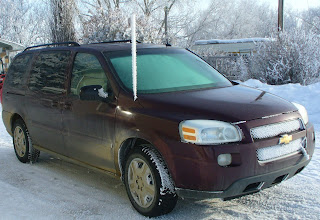 We've been having foggy, frosted days. One day in particular, showed frost patterns I've never seen before. Here's how my van looked when I first went outside that day. 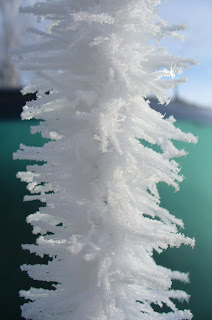 As you can see, about the only thing that's frosted is the antenna. I've never seen anything like it before. Here's a closeup of the horizontal frost crystals on the antenna. 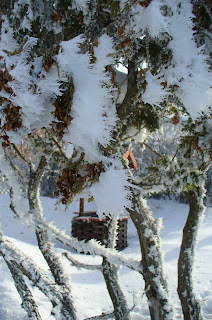 The wind must've blown the frost in from the south because this is what some of the trees looked like from that direction.

And yet when we go a few steps further to the north and turn around this is was I saw. 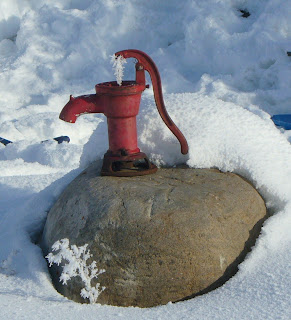 The frost was so selective that it only became attached to the metal road in this pump and the weed growing in front of it. 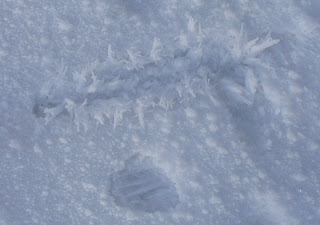 I happened to look down and saw a cat's paw print and another mark, both of which had attracted the frost in different ways.
Now this is probably a loaded question, but has there been any weird weather down your way?
Posted by Anita Mae Draper at 3:02:00 AM 10 comments: