Last year I posted many shots of morning and early afternoon sundogs. If you want to see them, click on
'Sun dogs' under the Labels in the right columns. I'm using a new camera this year and it seems to leave dots of light on my photos - other than the actual sundog effect - so please ignore those.

Those brilliant sundogs are back. I saw my first one of this season last week and tweeted about it. This was the photo included with that tweet:


The strange part about that sundog was that it appeared in the late afternoon, 2 hrs before sunset. Usually I'll see them between dawn and 2 pm. But it depends on the ice crystals in the air and at the time the above photo was taken, the distant trees were shimmery.

Then on Sunday, Nov 20th, we'd just left the house for church and I saw what I've come to call the 'Bethlehem Star' effect. I have no idea what the scientific or common name for this is, but I think the Bethlehem Star effect is self-explanatory. Look for yourself...


I've posted photos previously that show a magnificent white light below the sun, but this is the first time I've seen such a concentration beam straight down. What confused me was the lack of the sundog effect at this time. No mini rainbows or mini suns or either side of the actual sun itself - just this Bethlehem Star effect.

Then ten minutes later, Nelson said, "There's your sundog." Sure enough, this is what i saw...


The curved lights on either side of the photo is the actual sundog, however please ignore all the other spots on the photos. I have a new camera and it doesn't cover the lens when it's shut off. It's a Nikon CoolPix P500 and I'm supposed to keep the lens cap on but I'm so used to putting it on and shooting, that uncapping it slows me down. Which means I've gotten into the bad habit of leaving it off. So yes, the inner dots are probably dust on the lens.
So, does anyone know the actual name for what I call the Bethlehem Star effect?

And in case you're interested, I'm blogging about 19th century children's sleighs at Inkwell Inspirations today.

I'm talking about Heritage turkeys at Inkwell Inspirations today. Lots of turkey photos including this one: 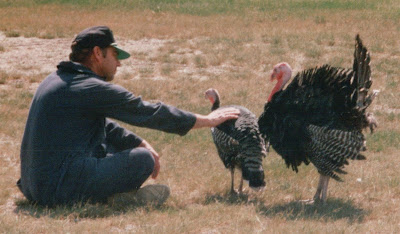 There's also info about The Canned Quilter and her site about canning, quilting, and making things yourself. She lives at Hickery Holler Farm in the Ozarks and her Nov 14 blog is about making your own Swiffer dust pads. Neat!


The questions for discussion today are:

- Were you aware of the roles the ALBC and RBC play?
- Have you ever looked a turkey in the eye? Touched one?
- Which variety do you think looks the nicest?
- Do you eat turkey for Thanksgiving/Christmas?
- Have you heard about the plight of the tigers?


Have a great day!

I just finished writing a Remembrance Day post on the church blog.

It's a special post because it tells the story of the lone stained glass window in our church. 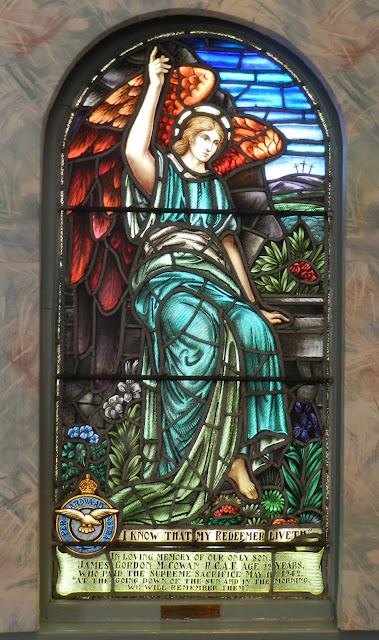 Check out http://newsfromthepews.blogspot.com/2011/11/we-remember.html for more info.

After not seeing moose in this area for years, they're making a comeback. Almost a year ago, on Dec 11th, 2010, we spotted a cow moose and her 2 yearlings although in my photo journal of them, I said they were 3 cow moose. My father quickly set me right.

We saw the same 3 moose in the spring but they were too far for photos.

Last month, a bull moose started hanging around a few miles from our farm. Nelson spotted him on the way home from work and came to get me but by the time we got back, the moose was too far for photos. The next evening while I was on my way back from town around 5:20, I spotted him about a mile down the road. At least I suspected the dark shape on the side of the road was him because everything else was golden or yellowing vegetation. The shape moved as I drove closer and my suspicions proved true. I pulled over to the side of the road and took these photos while he lumbered away toward the west. 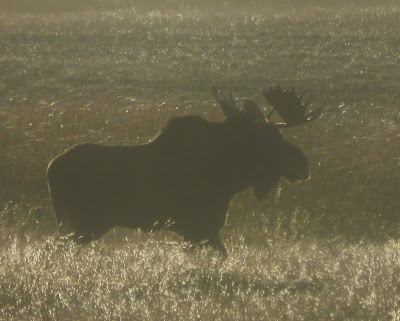 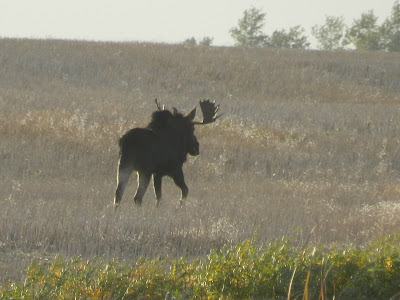 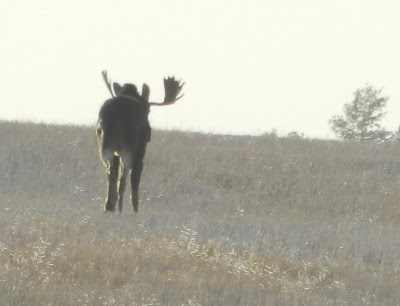 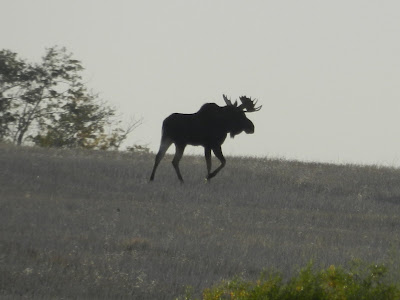 In between those photos, I was able to take this short video of the bull moose in action - slow action, to be sure, but action none the less. http://www.youtube.com/watch?v=va2lAWS3Fdo


Check my YouTube channel for more videos of animals and other things I find interesting.