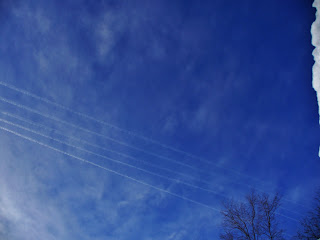 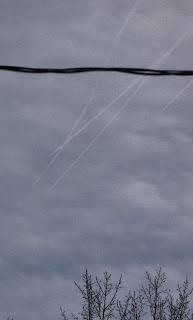 Then my  brain kicked in gear and I turned to see the actual jets, but this is all I got. I'm not sure where the 5th one went. Looks like they decided to play a bit since by that time they would've been over an area with scattered farms and very sporadic towns and villages.
And if you're wondering about the difference in the sky colour, the sky was cloudy to the left (SE) of the sun.
Anyway, if anyone knows what happened to those GE cameras, can you fill me in? It sure would be nice if I discovered it was a glitch after all.
Posted by Anita Mae Draper at 12:13:00 AM