My plan was to leave for Denver Monday morning but by the time I left, it was just after lunch. Then I ticked off my GPS because I headed north instead of south. But I’m sure glad I did because my Sony eReader was sitting at the post office. I headed west to Regina to pick up a couple things then turned south. This is the last photo I took of Saskatchewan looking north just before I crossed the Can/US border. 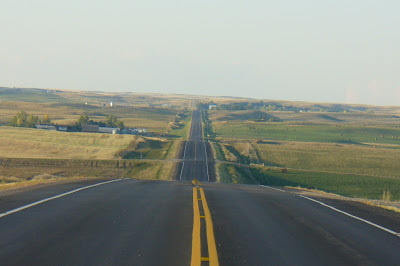 In this next photo, the border crossing is right in the middle of the photo where those little buildings are and then the hills of Montana. 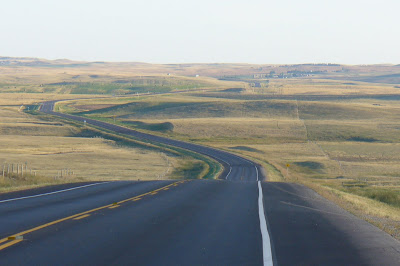 This next one is Plentywood Montana. Darkness fell soon after. When flashing lights came up behind me, I would've pulled over but there wasn't a shoulder on the road. I was going right on the speed limit so they couldn't have been for me. They weren't. They passed me by. A few mins later another came up behind me and passed. By the time the 3rd one came, I was getting jittery but they passed, too. I saw them turn off to the east. But not ten mins later, another came up behind me and then another one. They passed, too. And so many white crosses on the sides of the road designated fatalities. Not a good place to be driving. 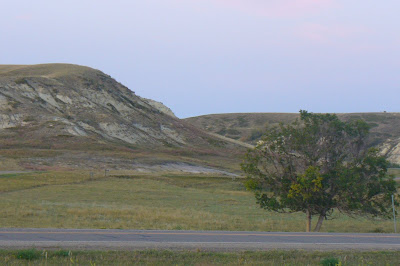 I stopped overnight in Sidney and left at 7:30 to this beautiful sight. The traffic cleared and I'd go miles and miles without seeing another vehicle. Heavenly. Just me and God's masterpiece. No wonder Charlie Russell was so inspired. 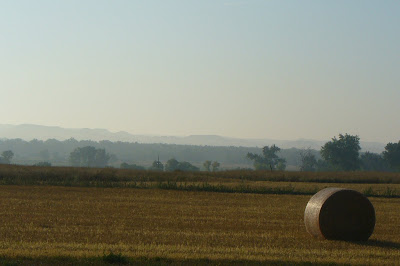 The Montana landscape is truly breathtaking. The northeast corner is dinosaur country. Here's a photo of the landscape typical on the west side of Hwy 16: 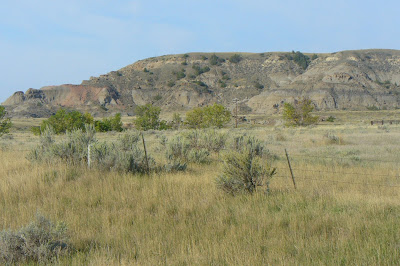 And here's what it looked like on the east side: 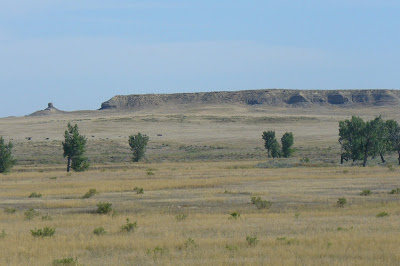 I entered Wyoming after lunch. The landscape here is much flatter without the distance hills. Part of this state is covered by grasslands. There is more traffic here on the roads - very busy in some places unlike the solitude of Montana. 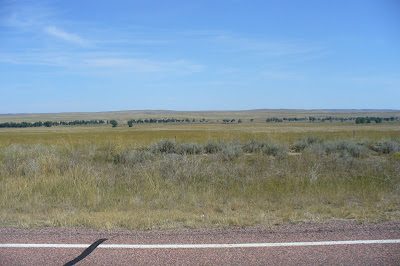 In the late afternoon, clouds were filling the skies. I saw some lightning in the west. Here's the western sky at 5 pm: 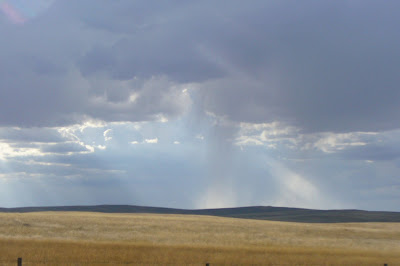 It was raining in the south too, although it stopped by the time I reached Douglas which you can't see in this photo. I believe that's Laramie Peak in the distance and although it looms over Douglas, I can't see it from my hotel. 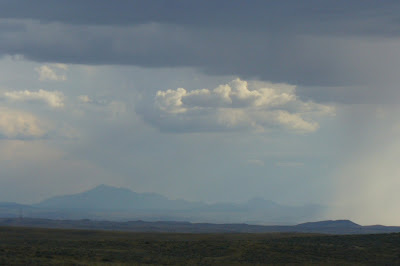 That's it for my adventures so far. I'll try to upload more photos in a day or two.
Posted by Anita Mae Draper at 8:35:00 PM