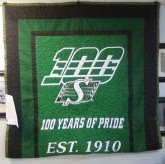 So who are you  rooting for tomorrow... the Saskatchewan Roughriders from the West... or the Montreal Alouettes from the East?
Posted by Anita Mae Draper at 2:13:00 AM