Give Me a Break

It's April 3rd today, right? At least I thought it was when I awoke at 4 am and started writing. But then hubby got up at 5, looked out the window and said, "You should get a picture of this." 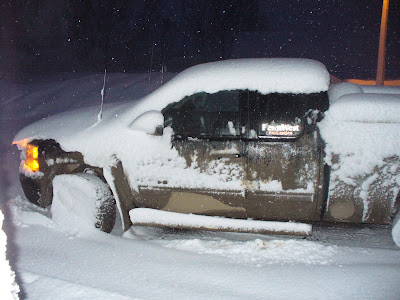 The next pic shows him going to work at 06:30, The sun should've been up at this time. But nope, too much snow blocking it. Nelson weaved a bit heading down the driveway as he surfed through the drifts, but he's been gone 3 hrs and I haven't heard from him so I guess he's okay. Nothing like driving on soft, slushy roads, eh. 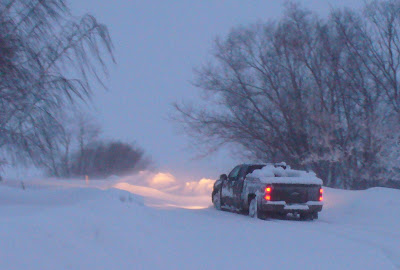 So what is this? Payback for the April Fool's Joke we played over at the Inkwell on Friday? But it was so much fun!

Whatever it is, it's kept us from church today. That's about 6" of the heavy wet stuff on top of a couple inches of thawed out mud. The temp was 0c (freezing point) at 6:30 and is now 3 degrees warmer. Ugh. What a mess! And no way my 2WD van can get through.

On one of my writer loops I read that someone was mowing their lawn yesterday.
Posted by Anita Mae Draper at 10:15:00 AM