Will and Kate's Royal Wedding 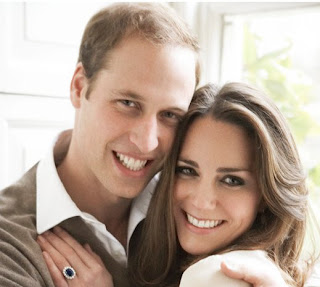 There are so many different sources of information to have on hand during the Royal Wedding of Kate and William, I've decided to write a post to keep them in one place.
The Official Royal Wedding site has plenty of photos and background information.
Did you know there's a Royal Family Facebook page? Clicking on 'Like' at the top of the page will show that you're 'attending' the event and you'll receive updates throughout the day. The Facebook page also shows how to submit a video blog to send well-wishes to the happy couple. And they want to know how you're sharing their special day.
Can't watch it all on TV? No problem. The Royal Channel is live streaming the event on it's YouTube channel. Not only can you see it live, but there's access to oodles of videos about anything royal.
My Monday Inkwell Inspiration post was called Royal Coach and Carriage.  It has photos of many processional coaches and carriages you may recognize from tv and photos. You'll see at least one at the royal wedding when the newlyweds leave Westminster Abbey in the 1902 State Landau just like Will's mum did all those years ago. 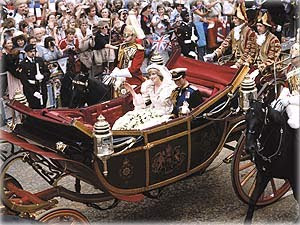 If you want the ceremony timetable, there's a free download of a very nice pdf copy of the Official Programme which includes an official photograph and route map. If you have the ibook app on your iphone, ipad, etc, then you can download the free Official Programme. Just go to your iphone (it's a free download) and search for Official Programme. This is a very nice digital keepsake.
The information I really wanted to know was the little details like ... when will Prince William leave Clarence House and head to the church? Or when will the Princess Catherine be kissed by her handsome Prince on the balcony of Buckingham Palace? Well, here's the itinerary which lists everything except the actual ceremony but that's in the Official Programme. What you'll find below is when the congregation begins to arrive at the abbey to the Royal flypast while the newlyweds are on the balcony of Buckingham Palace. I've emboldened the really juicy stuff...
Of course, these are all London times. Here in Sask, we are 7 hrs behind which means 8:15 London time is 1:15 am here. Official TV coverage starts at midnight on my local channel and yup, I'm already watching TLC for wonderful shows with background information.
8:15 a.m. - The congregation begin arriving at the Great North Door of London's Westminster Abbey.
9:50 a.m. - Governors-General and Prime Ministers of Realm Countries, the Diplomatic Corps and other distinguished guests arrive.
10:10 a.m. - Prince William and his brother and best man Prince Harry leave their father's residence Clarence House.
10:20 a.m. - Members of foreign royal families begin to arrive at the Abbey. Middleton's mother Carole and brother James will leave the Goring Hotel.
10:25 a.m. - Junior members of the British royal family leave Buckingham Palace.
10:35 a.m. - William's uncles Prince Edward and Prince Andrew and his aunt Princess Anne will leave the palace with members of their families.
10:38 a.m. - William's father Prince Charles will leave Clarence House with his wife Camilla.
10:40 a.m. - Queen Elizabeth and her husband Prince Philip are the last royals to leave.
10:48 a.m. - The bridesmaids and page boys leave the Goring.
10:51 a.m. - Middleton and her father Michael leave the hotel.
11 a.m. - The marriage service begins.
12:15 p.m. - William and Middleton will leave the Abbey in a carriage and return to Buckingham Palace followed by other senior members of the royal family and escorts from mounted cavalry in full dress uniform.
12:30 p.m. - The newlyweds arrive at the palace.
12:40 p.m. - The other royals, both British and foreign, arrive back at the palace.
1:25 p.m. - The queen, William and Middleton and their families appear on the balcony of Buckingham Palace.
1:30 p.m. A fly past by aircraft from the Royal Air Force and World War Two planes from the Battle of Britain Flight.
Sigh.
I hope you enjoy the ceremonies. I know I will. Come back here after and let me know your thoughts on the whole affair, okay?
Posted by Anita Mae Draper at 11:25:00 PM