From Coin Shows to Kilts

My weekend went the gamut from wonderfully satisfying to frightfully awful.

On Friday, I headed down to North Dakota to pick up my mail, exchange the free books at the Crosby Library and visit a bank for some state quarters. I listened to writing podcasts while I drove. A tiring, but satisfying day.

Sat morning found the kids and I packing the van with our overnight bags and heading to Regina. First stop was the Regina Coin Club’s Spring Coin and Stamp show where my son, JJ and I set out our displays. 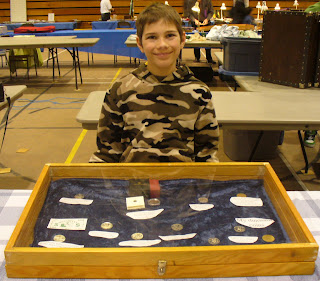 I entitled my display ‘Motherhood’ with the description: On these coins, bank notes and medals, you’ll find mothers nursing, rocking and playing with their babies. And yes, even protecting them. 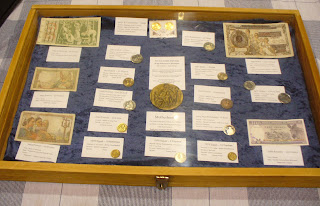 Once the set up was complete, we headed off to do a bit of shopping as Jessie needed an item for her recital costume. At noon, I dropped her off at the Royal Conservatory of Music and took the 2 boys back to the Coin Show.

First up was selling 30 old worn quarters that were no use to a coin collector due to holes and scratches. You couldn’t even make out the date on one of them. I headed over to the George Manz table and handed over my scrap quarters worth $7.50 if I brought them to a bank. A few mins later, I walked away with a cheque worth $54.65 in my wallet and a smile on my face.

We headed across the hall to where JJ’s CoinHawk mtg was about to start. This is an excellent coin club for kids up to 16. The club provides the young numismatists the required books and a binder to hold the info given out each month. As well, they usually hand out free coins, etc to every kid who attends the mtg. JJ has also rec’d 2 free magnifying glasses and the 2x2’s to hold his new coins. And membership in the club is FREE. It’s worth the trip into the city every month to give JJ this wonderful education of a hobby I’ve loved my entire life. And, the free coins sure help, too.

Anyway, we were half way through an interesting discussion on Canadian 25 cent pieces when the cell phone in my pocket vibrated. Jessie’s recital was over. I left the boys at the mtg and drove over to pick up a smiling Jessie. Her recital had gone well and her instructor had been pleased with her performance.

By the time we got back to the Coin Show, it was 3 pm and JJ’s mtg had just ended. Nick waved a new 1949 silver cased dollar at me which he’d won as a door prize. Plus they showed me the free 1999 and 2000 series coins sets (12 coins in each) which they rec’d for being CoinHawk members. They were happy but wanted to get to the pool.

First, however, I had an assignment to complete. I’d been hired by a Consumer organization as a Mystery Shopper. It took just over an hour to complete the assignment and I know you’d love to hear about it but that’s a topic for another post. J By the time we got out of the store, it was near 5 pm and the kids were antsy. After a trip to SuperStore to buy pepperoni sticks, snap peas, snacks, pop, muffins, juice, etc, we headed over to our hotel.

Once we hauled everything up to the room, the kids got into their swimsuits and waited for my nod. I tried to get onto the internet to check in with the Prairie Chicks blog where Victoria Bylin was guest blogging, but I couldn’t get on. I asked Jessie to try while I was gone and give my go ahead for the pool. Man, those kids disappeared fast!

Satisfied, I arrived back at the hotel at 9 as the kids were coming up from the pool, wet and happy.

That’s when my fun ended and my troubles began as I spent the next 4 hrs trying to log on and stay on the internet. Horrendous! Lots to talk about here but that’s another post.

Sun morning, the kids enjoyed a morning swim before we headed off to the coin Show. Being a CoinHawk, JJ did his stint at the registration table handing out free coins to any kids coming through the door, member or not. It was neat when they called the next door prize number because it was JJ’s and he was sitting right there. All he had to do was stand up and smile.

After an hour, we finally left the table and started shopping. None of the fancy cased stuff for me. No, I head for the buckets of mixed coins where my fingers turn black from who knows what after an hour of digging. There’s so much to see, I only stayed 30 mins or so at each dealer. Still, I missed one. Yes, I would’ve had more time if I hadn’t let the kids go for a morning swim, but that wasn’t an option.

The Show was over at 4 pm. With the judging completed, JJ and I headed over to pack up our displays. They informed us JJ had won the Junior division. Yay! As for the adults, they said the winner would be announced at the next mtg. However, they pointedly asked if I would be attending. Hmmm... 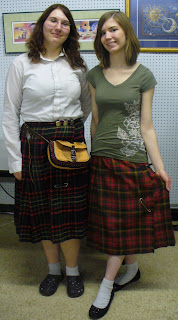 Within half an hour, we were on the road, 7-Eleven Slurpee’s in hand. But we couldn’t go home just yet.

The kids’ youth group was hosting a Scottish Fundraiser for the kids going on a mission trip to Scotland this summer. Here’s Samantha and my Jessie (on the right) after serving the meal to 30 people. Once the clean up was done, Jessie and Nick were free to leave so we were back on the road, heading south to home. Nelson had joined us for the meal but was already home sleeping since he’d been up since 4 am.

Finally, just before 10 pm, we drove into the dry yard and unloaded the van. It sure was nice to be home.

And how was your weekend? Do anything different? Exciting? Come on, tell us...
Posted by Anita Mae Draper at 2:22:00 PM